Centre of HOPE- the i-Innovate Campaign 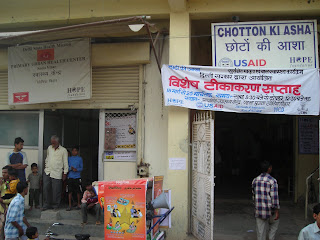 Innovation at the helm of social development is a force to reckon with. It has always been since ages, the motivation to progress, as is the need to carry it through. The motivation for social innovation catalysing a process is an
attributive contribution to the society. The social change that we speak of in the present context as well as in the past has always applauded the introduction of an innovative idea both for direct and indirect audience. But there has never been a dearth of criticism and opposition as well. As natural it can be, every social change is marked with both criticism and approval of the masses. The acceptance of the same idea has been the resultant of its success or failure. More then anything else, innovation for the masses has to comply with the needs of the masses and this has taken the fight to a much anticipated degree then usual.

Many organisations have in the past and in recent times also made many such changes in their interaction with the beneficiaries. The organisations here are more of the non-profit nature or non-governmental organisations as they are called. We talk of innovations at the implementation level when interactions are mentioned. It is rather an exciting affair to understand the complexity of all the simple ways being devised or adopted to get things running easily for the common people.

It is also important to look at how an innovative model of implementation has helped in making things easy for the people of a particular place and also for the organisation.

One such innovative model adopted by HOPE foundation and then by the Chotton Ki Asha program under the same institution was the ‘Centre of HOPE’ model. The Centre of HOPE is a model concept with HOPE foundation, opening project offices in the target area itself. This office besides the project concerned also develops various other courses or streams for the development of the area with a prior need assessment done. With Chotton Ki Asha project, the HOPE foundation has done the same. Besides the Maternal and Child Survival program with the USAID, the organisation is also running a number of vocational programs along with a computer centre. This strategically signifies the focus of HOPE foundation to develop the project area besides working on the concerned issue. The program focuses on the development of the youth in the area and their scaling up in skills required in the job world today. The program has an underlying strategy to develop gender sensitization and empowerment of the girl child. With the focus on girls, the program has prioritised the admission of more girls to the vocational courses.

An innovative model so designed is the involvement of the vocational training students in becoming ‘behaviour change agents’ in the health project. The curriculum of all the vocational courses in the “Centre of HOPE” has a community development component which need the students to volunteer for ….hours being a part of any program activity organised by the health project. A holistic development with sensitization in social issues helps the students to organise their skills better for the job world. Understanding the skills required to be a step further in today’s world with a high level of competitiveness among the job aspirants, these soft skills will be an advantage for the students.

Moreover these students in themselves will become responsible residents of the community and positive agents of health seeking behaviour and practices.

The success of any innovative model depends on the acceptance of the model by the beneficiaries, the adaptability of the model at different situations and its cost-effectiveness, especially when it is a community intervention. 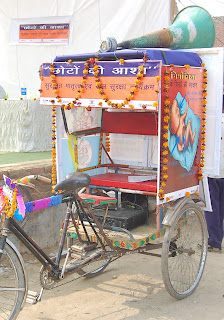 As one of the primary objectives of the Chotton Ki Asha(CKA)program is to change or appreciate the health practices of the target population, Behaviour Change Communication (BCC) becomes an effective method. Learning from past experiences in other Maternal and Child Survival programs, the CKA program want to apply innovative strategies which are replicable nationally as well as internationally if possible.

Under the i-Innovate campaign initiated by the T&C Dept, for sharing innovative and effective strategies in the program, the department wants to share some of its very own strategies applied in the CKA program over the years for changing behaviours.

One of the foremost strategies used was that of the BCC rickshaw. The BCC rickshaw replicates the model of the ‘bioscope’ in the Indian Villages. The ‘bioscope’ model is of those days when a cycle with a box would travel round the village and announce about a movie show coming in their place. The people doing this would use all kinds of voice modulations and music to attract people in the village to come for the show. Generally it is called the "Village Road Show". The ‘bioscope’ would even use some clips from movies and play it to be viewed by the children through a hole in the box. The clips would be moving in a sequence which would run like a film. This really would excite the people resulting in a mass audience coming for the movie show.

The CKA rickshaw does something similar! The rickshaw is decorated with many health related posters developed by CKA project and other accessories giving it a visibility unlike the ordinary rickshaws. Loaded with that, there is also an announcing system fixed which helps to make announcements for all special days celebrated by the program. What it also does is to announce health messages in the area to make people aware of the focused interventions of the program. Many a times, the rickshaw has been able to inform people about special immunization drives, Women’s day celebrations, School hygiene program, Handwashing program and many others celebrated by the CKA Program.

The BCC rickshaw also distributes health related pamphlets in the community for improving health practices in the area through knowledge base improvement.

Over the years, the BCC rickshaw has been very effective to make differences in inducing health related messages in the area. We have been able to reach a mass audience in both the areas of Rajiv Nagar and Sonia Vihar. Though the demographics of both the areas are different considering that Rajiv Nagar is a Muslim dominated area and Sonia Vihar being a Hindu dominated area. The program has always tried to be culturally sensitive to the beliefs and traditions of the target population while dissminating the messages. It has always functioned within a virtual periphery where it does not oppose the traditions of any person/community but is able to change them behaviours through positive thinking and adoption of good health practices.

Our vision is that by the end of the program, the population is able to adopt such good practices and make them a part of everyday lives and live a healthy life!
Posted by Chotton Ki Asha Program at 11:39 PM No comments:

A picture says a thousand words! what does this one say? 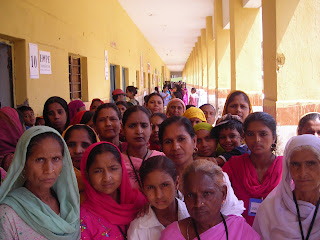 What does this picture say to you? we would like to hear from you ..send us a caption for the picture and we judge the best caption...
Posted by Chotton Ki Asha Program at 1:22 AM 13 comments: