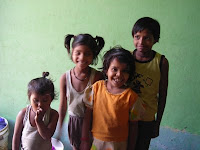 Children of Sonia Vihar in the Handwashing Day Celebrations, 2008- A way towards Change...

In the last two years, the Chotton Ki Asha program has fought its way to bring itself to a status it is in today. I should say that it is a heartfelt feeling to be writing for this program which has seen nothing but “Change” in the last two years of its functioning.
The word today is “Change” and what better simile do I have then relating it to the world famous campaign of the new President-elect of the United States of America, Mr. Barack Obama. We talk about alteration in systems every day of our life or maybe in instances where the present system doesn’t yield much for us. But in this change that we talk about, a question arises as to what do we desire and what is our role in that “Change” that we want to see?

Though it may be a bleak comparison to bring a campaign which created history to a program in the millions such as this, running around the world, it is but an encouragement no less worth working for.

In his memorable winning speech after the poll results, Obama said “Its been a long time coming, but tonight, because of what we did on this date in this election at this defining moment, change has come to America”

Deriving a substantial degree of encouragement from the same lines, I would like to see a ‘Change’ in this cocoon like place that we are working in, with a population of approximately 200,000 people. It may defy many arguments, but the longest campaign for the Presidential elections of USA has found ‘Hope’ for many in their daily life and in their struggles in life. And in penning down the first editorial page for the Chotton Ki Asha blog, there is nothing more then his win over all odds that is a lesson for us.

For the program, Chotton Ki Asha, it gives the hope that change is inevitable whether it comes today, in two years or even years after the program has left this place. From having no authorised medical facilities in the area to the first Public-Private Partnership in Sonia Vihar, things have changed for better. It is hope against odds that the time has come to see the “change” we want to, even in the remotest places of the urban and rural habitations.

The endless instances of struggle everyday in running the program with the support of our partners both public and private, has helped us bring hope for many. It is laudable when I think of all, who form the part of this family called “Chotton Ki Asha”, of how they are integral to the success of this program and to the ‘Change’ that they believe they will be able to see.

When I talk sometimes to people in the area and ask them about how they find the program being here for the last two years and continuing to be, they give me a short and straight answer which I will term as ‘productive’. They say it has given them an ‘alternative’ to choose if I may interpret it in the most lucid way possible. It is an option to ward off the hindrances and hope for better health which was absent in the past.
I would like to end the note with a near perfect example from the pages of Obama’s speech. He addressed the American public saying ‘The road ahead will be long. Our climb will be steep. We may not get there in one year or even in one term. But, America, I have never been more hopeful than I am tonight that we will get there. I promise you, we as people will get there’

What better statement can I find in the present context, then what he made out there in the middle of 1,25,000 crowd and many more millions watching him from across the world including America.

I hope the same hope lies for us ahead while working in this program and for the people of this area.
Posted by Chotton Ki Asha Program at 9:54 PM