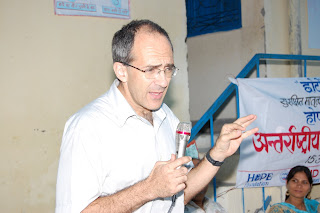 "Chotton Ki Asha" (CKA) for HOPE foundation/HOPE worldwide is the culmination of a dream we've had since we started the organization in 1991, bandaging the wounds of leprosy patients in Delhi, and running a mobile medical clinic in the slums of Chennai.
India's cities are crowded with slum-dwellers who come to the city seeking opportunity, trying to earn money to send home to their families in the villages. The few hundred rupees that they are able to send home each month can mean the difference between life and death for those they love back home. For this reason many are willing to endure terrible conditions in urban slums, living in crowded, tiny spaces, in places without proper water supply, sanitation, or roads, without good quality healthcare or schools nearby.

Often these migrants bring their families, and so the children end up being raised in these difficult conditions. Without adequate health care, it is impossible for a poor person to grasp the opportunity to improve their family's lot in life. With all of its success in the global marketplace and as a rising political power, malnutrition in India is still higher than that in sub-Saharan Africa. We see this suffering every day, and we want to make a difference.
This is why "Chotton Ki Asha" is so encouraging to us at HOPE worldwide. We ran mobile medical clinics in the 1990s for about 7 years, serving 5 major slums in both Bangalore and Chennai, treating thousands of people every month (hundreds of people daily in each city). These programs also were accompanied by health education. Eventually the city opened primary health care facilities to take care of these people, and so our programs served as a bridge that made a difference before the government stepped in.
But the CKA program takes this idea a step further. Through the excellent mentoring of USAID and partners like the University College of Medical Sciences at GTB Hospital, and the MCD IPP VIII program, HOPE worldwide has learned how to put together a state-of-the-art "child survival" program, using sophisticated techniques like PD Hearth, BEHAVE framework BCC, KPC baseline and midterm surveys using LQAS, and volunteer and community mobilization on a large scale. Coupled with powerful partnerships with both MCD and the Delhi Government, the CKA program has been able to leverage government resources to allow the opening of 3 health posts in Sonia Vihar and Rajeev Nagar, which provide immunization and ANC services (with help from UCMS doctors). CKA has also opened, in a historic public-private partnership with DHS of Delhi Government, a Primary Urban Health Center (PUHC) right in the community. This PUHC already treats 5000+ patients per month. It has a lab, and provides innovative drug management and crowd control techniques that make it one of the most user-friendly PUHCs in Delhi.
In addition, since our program began the Delhi Government, at our encouragement, has established over 70 ICDS anganwadis in Sonia Vihar and Rajiv Nagar, as well as opening a new "seed PUHC" in Sonia Vihar to provide health services. These initiatives are promoting sustainability in our efforts.
The program also features an exciting holistic approach that adds other services to the community, following HOPE worldwide's "Center of HOPE" methodology. These include a primary school for young children, vocational training for youth in computers, beauty skills, tailoring, and financial literacy (through GE Money), as well as micro-credit sponsored by Project Redwood. Through the wonderful work of our team over 77 Mahila Arogya Samitis have been formed with 850+ volunteers, as well as several Basti Vikas Manch that deal with health and sanitation issues in the community.
We are working with both Muslim and Hindu leaders to make this program successful at the grassroots level.The government is listening to the "lessons learned" from this program. We have met with DHS officials of the Delhi Government as well as officials of both NRHM and NUHM to share our insights.
I am personally very grateful to Marilyn Patton (who is our "technical backstop" at HOPE worldwide in the US) and Rachna Sujay (Program Director) and the whole CKA team--Saji, Ashish, Prashant, Bina, Sylvia, Satyender , Sarika , Ajay Soni, Kamlesh, and others--who are doing a wonderful job making this happen. I'm also very grateful to donors (some anonymous) like Tomoko and others who have given generously to help us meet our "cost share" requirements and also go beyond that to meet many needs.
Posted by Chotton Ki Asha Program at 9:41 PM